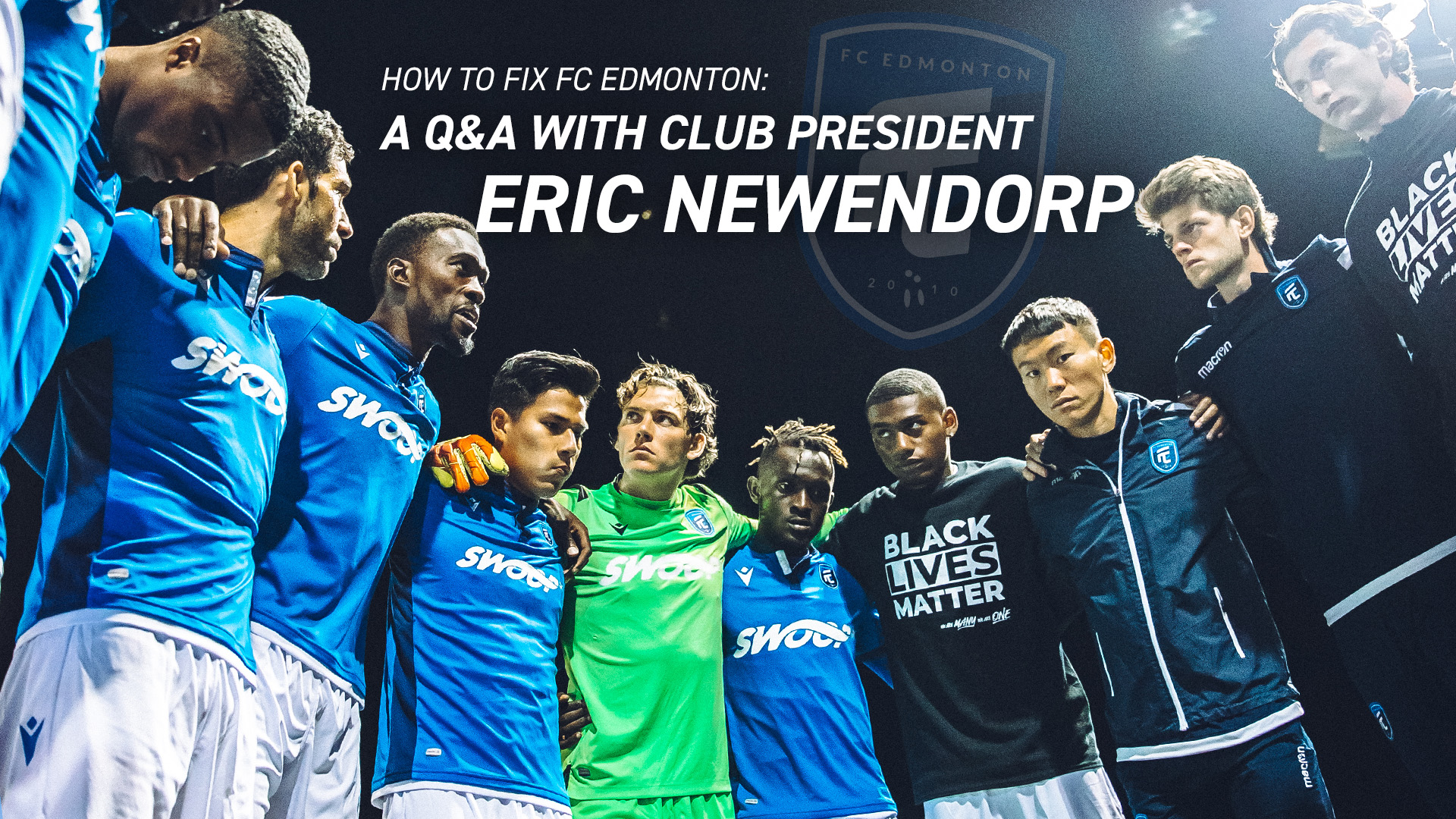 There may be no more daunting job in the Canadian Premier League than president of FC Edmonton.

The Eddies joined the CPL with seven seasons in the NASL under their belt and one of the city’s own sons emerging as the most exciting male player in the history of the sport in this country.

But that foundation is yet to translate to meaningful success on or off the field, with Edmonton finishing in last place at this year’s Island Games and drawing the second-lowest crowds in the league in 2019.

Taking the reins with a mandate to make changes is new president and general manager Eric Newendorp, a native of Oklahoma with experience across professional soccer, hockey, and baseball.

In a conversation with OneSoccer, which has been edited for length and clarity, Newendorp shared his thoughts on the club’s selection of a new head coach, the state of its existing roster, and how he plans to entice more fans to Clarke Stadium in 2021.

What are your impressions of the state of the club based on what you’ve seen so far?

“Well, there’s a lot of work to do, isn’t there? But that’s OK. I know there’s good history too. I’m not somebody who’s going to come in and say it’s all bad and I’m here to make it better.

“I’m here to help. I want to help. I definitely want to make it better. Everybody that’s connected to the club understands that it needs to be improved. If it didn’t, I wouldn’t be talking to you because the other guy would still be here, and everything would be fine.

“But at the same time, it’s a club with a rich history. It’s been part of this community for a long time and I respect that. I want to integrate in this community and bring this club up in this market so that people are as proud to say that they’re an FC Edmonton fan as they might as an Edmonton Oilers, Stingers, or Football Team fan.

“We have some work to do but I look at and understand the rich history of the club, and there’s been some great things here. My predecessors have done good things. My role is to take the good and amplify that and take the not so good and fix things so that we’re successful.”

In terms of the on-field side, would it be fair to say that your first priority is finding a new head coach? How is that search going?

“That is absolutely fair. It is the singular thing that is present now that links to many, many other things, not just on the pitch.

“It’s going well. We have great candidates. I’ve talked to lots of really talented, good candidates, so much so that it has been hard to narrow in on finalists. We’re real close and hopefully we’ll be able to let the world know who’s our next guy within the next seven to 14 days.”

Are there any qualities in particular you are looking for in a new coach?

“Somebody that had some first-team head-coaching experience, ideally professionally — although I will tell you that we’ve had some candidates that have been assistants, or head coaches not in the professional ranks, that are really talented.

“Beyond that, somebody with a good network, in North America and/or internationally. That was important — that they had resources to go and find players.

“I wanted to know their process and how they evaluated players. I’ve watched a lot of professional football, so I know enough to have an educated opinion. But I’m not a trained professional soccer coach and so I will always defer to him in that regard.

“The other thing is that I wanted somebody who was, for lack of a better term, business-savvy and understood the importance of the core product — which is what happens on the pitch — and how it ties into the health of the business and could speak intelligently about that.

“I’m not looking for a yes man, but (I wanted) somebody that I knew could have a good, strong working relationship with because we’re going to be spending hours and hours together. Somebody that understood it was important to me that they got the business side of things and were willing to do their part to help us on that side.”

What’s the status of the existing roster? Are you waiting for the new coach to come in?

“I told all the players that I respect them trying to make a living in the short window they have to do it. I respect a player’s right to try to earn as much compensation as they can. I didn’t want to hold any of our current players back if they felt they wanted to shop themselves around because I wasn’t prepared to put contracts in front of any of them for obvious reasons — our results from the Island Games.

“If the new head coach comes in and says, ‘I want all of these players back’, I might have my doubts, but I’ll have to trust them. If not, we might have a completely new roster. We’ll just have to wait and see.”

If fans are allowed back into stadiums next year, how do you think this club can grow its attendances and reach more people in the community?

“When you’re out and about meeting people in the community to try to get them connected to the club, to make an investment in the club… yeah, they make a monetary investment which is important for the health of the club, but it’s not just their money. It’s their emotions, their time, and their energy.

“Ultimately it doesn’t do any good if you don’t back that up. We’ll only get a chance to prove that once we get into Clarke Stadium. A big part of my responsibility — and our responsibility collectively — is to prepare for that day.

“It’s a challenge, but one we’re willing to face. It’s going to be hard work. That’s pro sports, man. I teach a little bit at university and I tell students who think they want to be in the sports business that they concentrate too much on the word ‘sports’ and not enough on the word ‘business’. It’s hard work.”

There is a feeling around the league that Clarke Stadium has fallen behind the standards other teams have set. Do you have any plans to change or modernize the venue?

“We have great partners in the City of Edmonton. They care about this club. I’ve had nothing but great conversations with them. They will support anywhere and everywhere they can. Part of that is I know we’re getting new lighting. That will do wonders in terms of night and how we make that look.

“There are definitely things around that stadium that we can do to provide our fans that feeling that this is a professional, major-league experience — that the stadium is clearly the home of their favourite club.

“I don’t think you’ll see a whole lot of capital improvements in terms of the structural (side) — but absolutely our hope is that when our fans enter the grounds, they will have a clear understanding of, ‘Oh, OK. This is different. The standards are different. This is a pro-level, major-league venue.’

“Some of that is up to Mr. Fath and what he supports. I will push where I think it’s practical to do so. We probably won’t be able to do everything I want to do, and that’s OK. But the idea is to take that stadium and do some things that we can do to improve the fan experience.”

Where would you like to see FC Edmonton in five years’ time?

“At least with one CPL championship — one at a minimum.

“Be a club that’s known for what we stand for: our promises, our work ethic, our standards, our professionalism, our integration into the community.

“I would like for us to be the clear No. 3, for lack of a better term, professional team in this market. I think we have some work to do. There are pockets of this city that still don’t really know we exist. We have some challenging work to do there.

“We want to be a club that’s easily recognizable and affiliated with this city, the sport we represent, and what the sport represents around the world.”